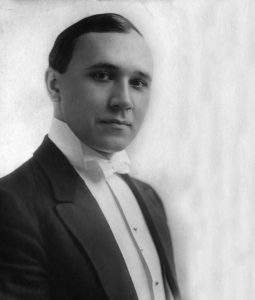 Eustasio Rosales Patiño was born in Bogota in the late 19th century and moved to Chicago in 1900. In his lifetime his works were performed by the Chicago Symphony Orchestra, he was known as “Chicago’s first Hispanic composer,” and he established himself as a well-regarded conductor. After his death, however, his manuscripts were put into storage in his descendents’ home, and his music was unheard and untouched for 80 years. In 2015, his music was re-discovered and his opera, Andina, was given what is thought to be a long-overdue world premiere. His beautiful song, A Mother to Her Son, is performed here in 2016 by Mulati Ensemble members Johanna Ortegon and Carolina Gomez in collaboration with Crossing Borders Music.

More information about Rosales is available on the website created by his great-grandson, Arlen Parsa. Arlen also created and award-winning comic documentary about the revival of Rosales’ opera.