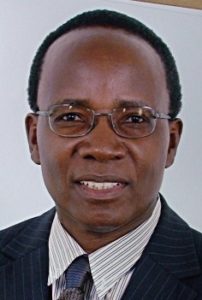 Justinian Tamusuza studied composition at Northwestern University in Evanston, IL, before returning to his native Uganda to teach music composition at Makerere University in Kampala. His works for Western instruments are written in a style that imitates music of the Buganda ethnic group. As a professor in multi-ethnic Uganda, he encourages his students to draw upon the rich and diverse musical heritage of their own ethnic traditions. The first movement of his string quartet, On the Way of the Cross, which celebrates the Uganda Martyrs, was recorded by the Kronos Quartet on their best-selling album Pieces of Africa.